“It’s important for mayors to work together. It’s very hard to do things that are visionary or bold or a little bit different than the status quo alone.” 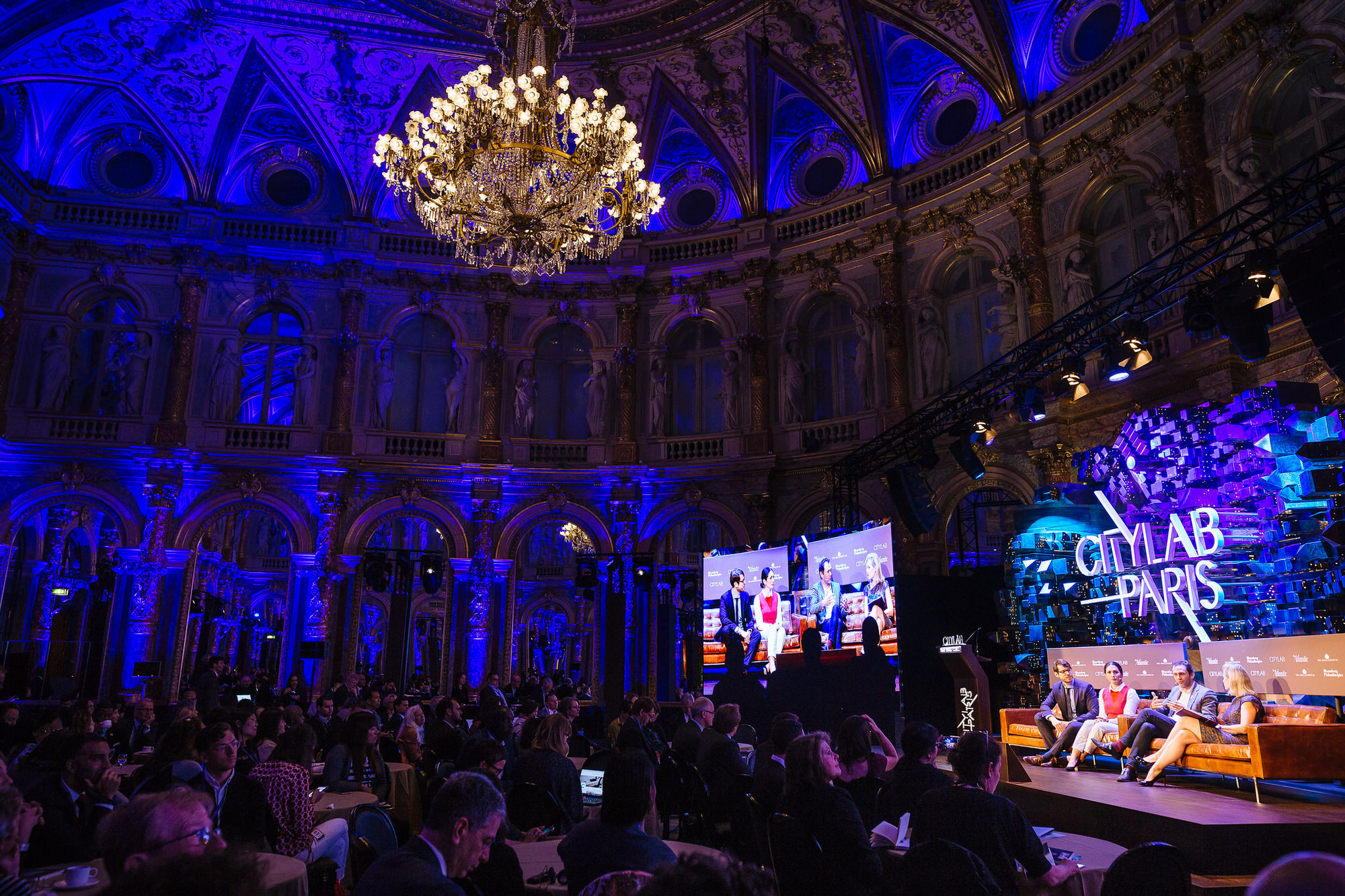 CityLab brought together hundreds of innovative city leaders in Paris, France, to share ideas that are improving cities around the world. 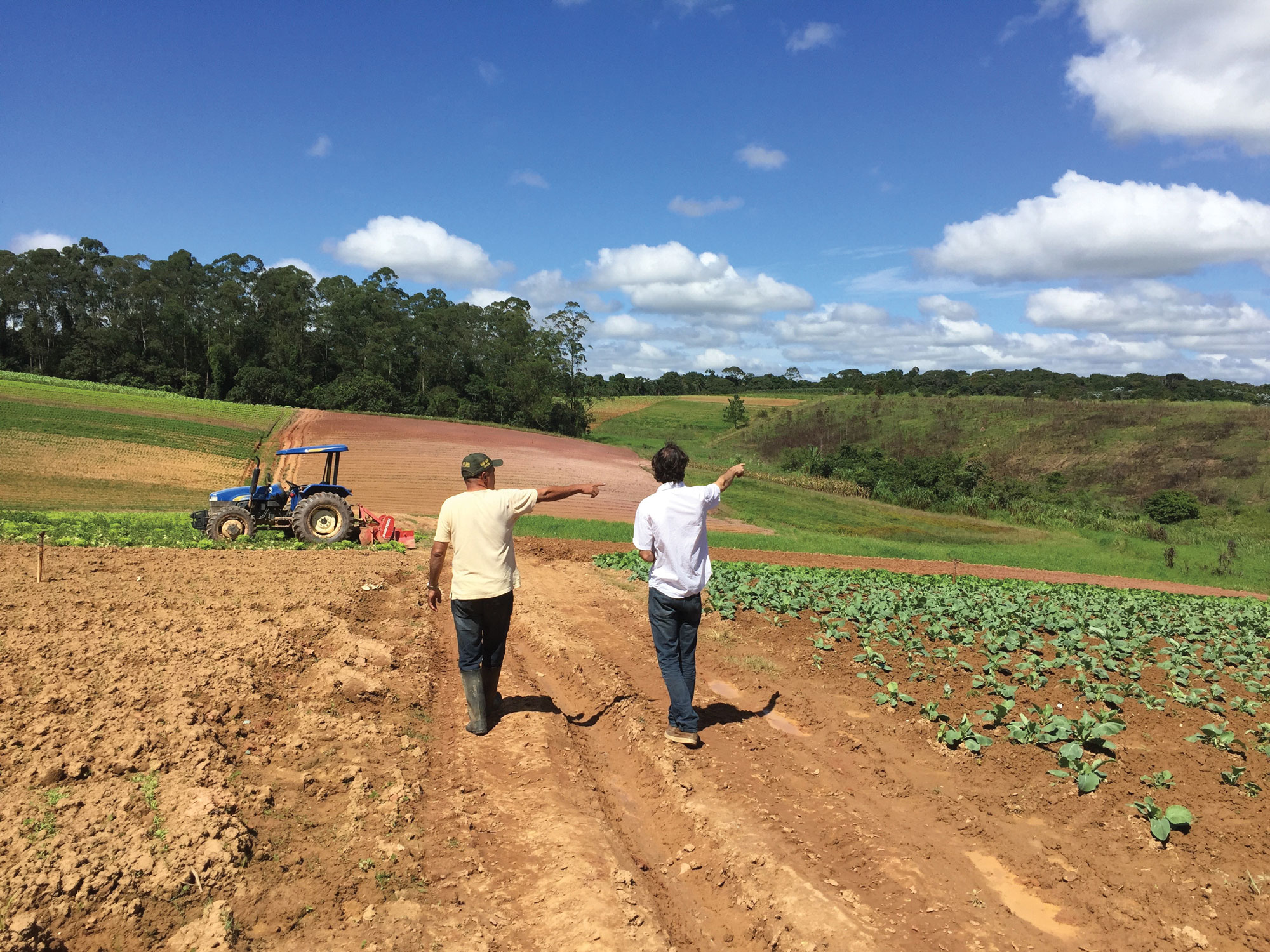 In 2017, as part of the Bloomberg American Cities Initiative, the Mayors Challenge returned to the United States where, for the first time, 35 finalist cities received up to $100,000 to test and refine their ideas. These cities will resubmit their proposals and a distinguished selection committee, co-chaired by former U.S. Ambassador Caroline Kennedy and former Xerox Chairman and CEO Ursula Burns, will select the concepts that have the greatest potential to improve lives. The five winners, including a $5 million grand prize winning city and four $1 million winning cities, will use their awarded funds to bring their ideas to life.

In 2017, nearly 4,000 city employees in 308 U.S. cities attended workshops to build skills and refine concepts for their applications.

Providence was the grand prize winner of the 2013 U.S. Mayors Challenge. Their project, Providence Talks, was designed to help the city increase the number of words that lower-income parents use when speaking with their children so that children hear closer to the 15,000 words per day critical for healthy brain development.

By pairing technology — a digital “pedometer“ that tracks the number of words children hear — with coaching to encourage caregivers to talk and read more with their children, Providence Talks is helping equip children from lower-income families for success in school and put them on a more level playing field with their higher-income peers. A Brown University evaluation showed the program is producing results: More than half the children who complete the program are hearing, on average, more than 50 percent more words per day. This progress is providing a road map for other cities. Over a dozen cities have expressed interest in the program, and two communities are already replicating it: New Haven, Connecticut, and Cherokee County, North Carolina. 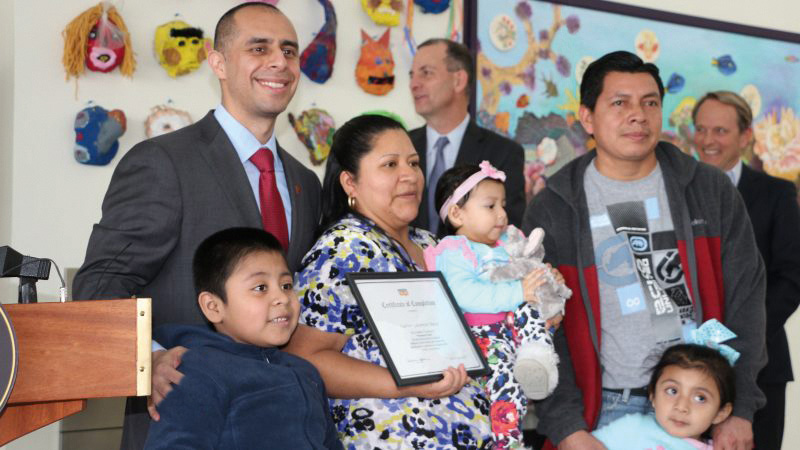 Mayor Jorge Elorza of Providence, Rhode Island, with a family participating in the program. Credit: City of Providence

Investing in Mayors and City Leaders 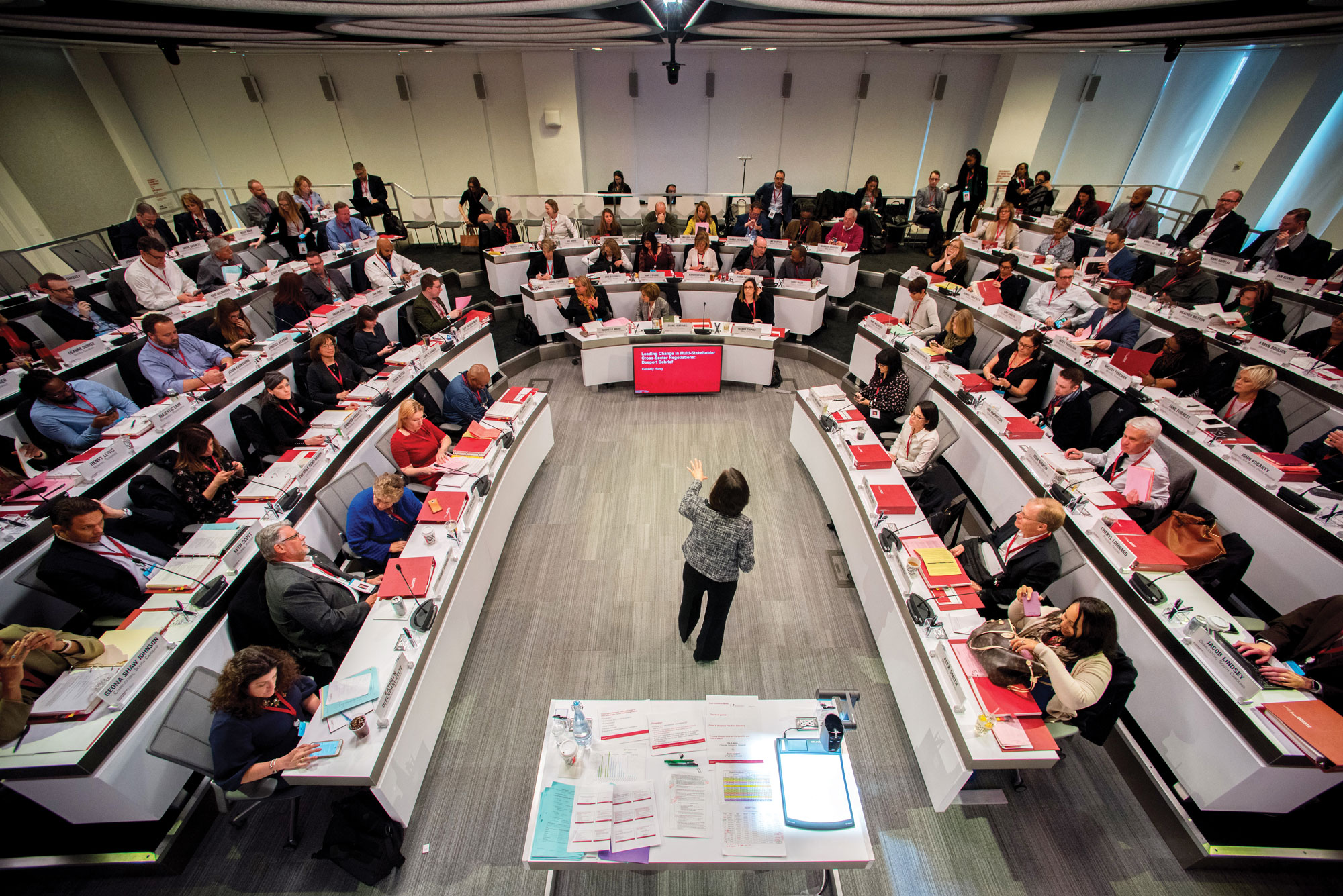 Harvard professors held classes in New York for both mayors and senior members of their teams.

Mayors are in charge of running large, complex organizations but often lack the opportunity to learn from world-class experts how to develop their leadership skills and create more effective organizations. In an effort to equip city leaders with the tools and techniques needed to tackle their toughest challenges and develop a culture of continuous innovation inside city halls, Bloomberg Philanthropies is helping provide mayors and senior city hall staff with high-quality leadership development training similar to that available to business executives.

A collaboration among Bloomberg Philanthropies, Harvard Business School, and the Harvard Kennedy School of Government, the Bloomberg Harvard City Leadership Initiative kicks off with in-person training sessions in New York City, where mayors and senior staff spend several days with their peers learning together from professors and experts from the Bloomberg Philanthropies network. These sessions are complemented by field visits that bring classroom lessons to life as well as networking opportunities.

“The Bloomberg Harvard City Leadership Initiative was pivotal in helping my team plot the course, moving Philadelphia toward a new Board of Education that I believe will benefit children and families for generations.”
Jim Kenney
Mayor, Philadelphia, Pennsylvania 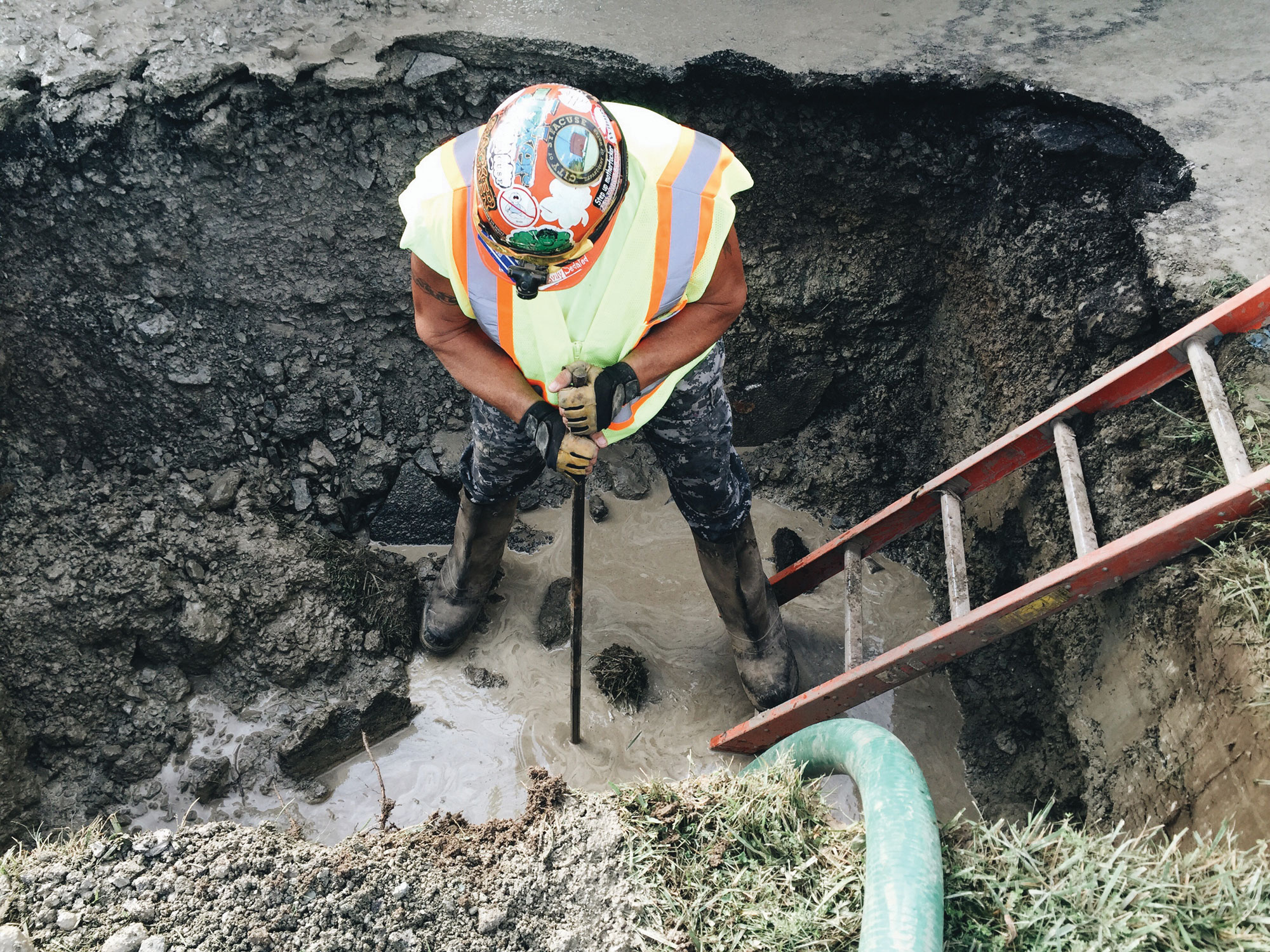 Syracuse, New York, has improved how it repairs its water infrastructure with help from its i-team. Credit: Addison Spears/City of Syracuse

Local leaders are increasingly interested in applying innovative approaches to big challenges, but too often lack the resources to turn ideas into action. To meet this need, Bloomberg Philanthropies funds innovation teams — or “i-teams“ — in city halls around the world. These i-teams, which are composed of data analysts, designers, and researchers, help mayors manage across agencies and creatively tackle each city’s top priorities.

The i-team in Syracuse, New York, for example, has helped the city save more than $1.2 million on infrastructure improvements by proactively repairing water supply and sewer lines before they break. The i-team partnered with data scientists at the University of Chicago to apply new technology to predict where leaks will occur. They also coordinated their work with road crews to reduce disruption to the community during repairs. From this work, Syracuse has shared lessons with cities from Phoenix, Arizona, to Seattle, Washington.

An i-team in Tel Aviv, Israel, has helped the city address challenges in the neighborhood of Neve Sha’anan caused by rapidly changing demographics and the evolving needs of the community’s many new immigrants. By listening to residents and then bringing together more than $1.3 million in resources from the city, the i-team was able to help create education centers for youth, continuing education classes for adults, and an international food festival to foster community among different groups and celebrate the neighborhood’s cultural and ethnic diversity.

“There is great value in the i-teams. We want many of these projects that will help better the community.”
Togod Omer
Tel Aviv resident; Sudanese refugee

“We can’t afford not to be innovative and creative.”
Ron Huldai
Mayor, Tel Aviv, Israel 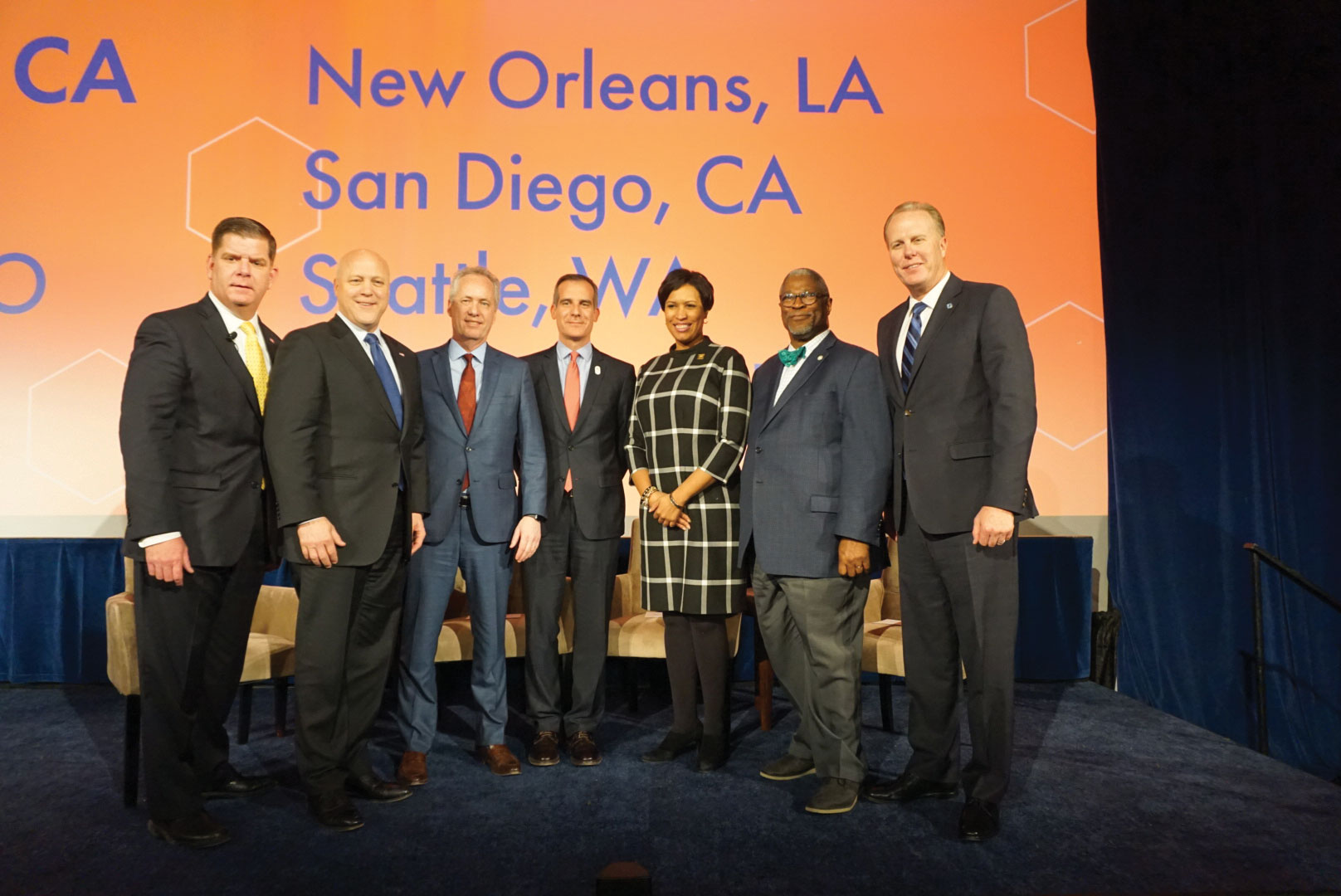 City leaders must use data and evidence to efficiently allocate resources and ensure that city initiatives actually improve residents’ lives. That is why, in 2015, Bloomberg Philanthropies created the What Works Cities initiative in collaboration with five world-class partners: the Behavioral Insights Team; the Government Performance Lab at the Harvard Kennedy School; the Center for Government Excellence at Johns Hopkins University; Results for America; and the Sunlight Foundation.

By joining forces with mayors to improve the way 100 mid-size U.S. cities use data, the program has helped local government be more efficient and more effective in responding to communities’ changing needs.

In early 2018, Bloomberg Philanthropies launched What Works Cities Certification, an effort to celebrate cities that best use data to improve residents’ lives and accelerate the progress of others. Nine U.S. cities received official What Works Cities Certification, including Los Angeles, California — the only city to obtain gold-level certification. Los Angeles was recognized for its exemplary use of data to diagnose problems, generate solutions, and manage resources to take on challenges like crime, traffic, and pollution.

“The more cities integrate data into their planning and operations, the more progress our country will be able to make on the common challenges we face.”
Mike Bloomberg

Bringing Together the Best and Brightest to Make Cities More Livable 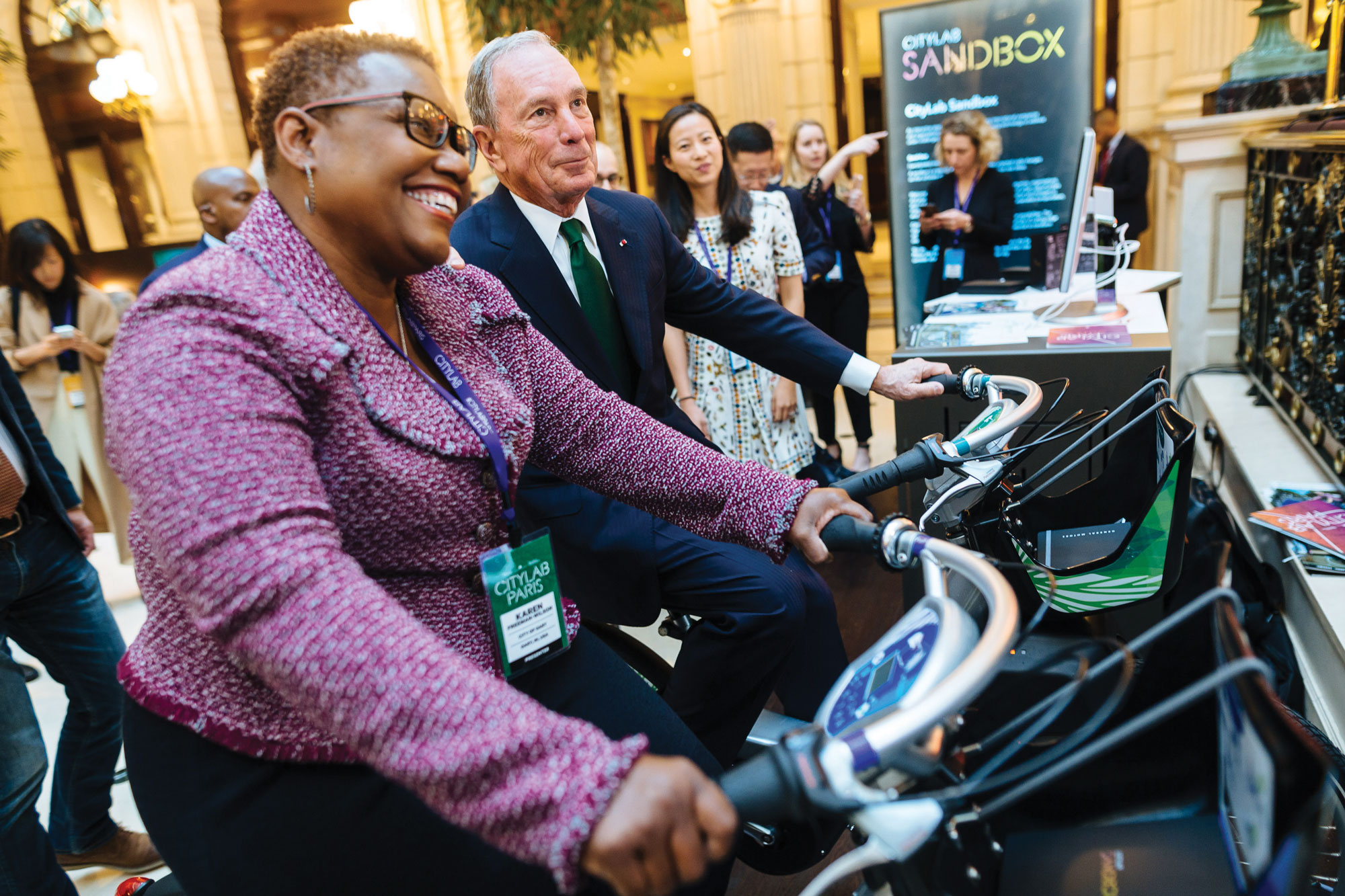 For the fifth year, Bloomberg Philanthropies partnered with the Aspen Institute and The Atlantic to host CityLab, a three-day conference of city leaders from across the globe and from all sectors.

CityLab gathers the world’s most creative mayors and urban innovators with artists, academics, funders, and other public- and private-sector leaders focused on improving cities and spreading strategies that work.

Hosted in Paris, the 2017 CityLab brought together more than 400 attendees to discuss the role cities play in the world and learn how others are addressing common challenges like climate change, integration of refugees, terrorism, and economic mobility. Attendees and speakers hailed from more than 140 cities and 60 countries. At the start of the conference, Bloomberg Philanthropies hosted a special session for mayors to connect and share lessons with peers from around the world.

Past CityLabs have been held in London, Los Angeles, Miami, and New York. In 2018, CityLab will take place in Detroit, Michigan. 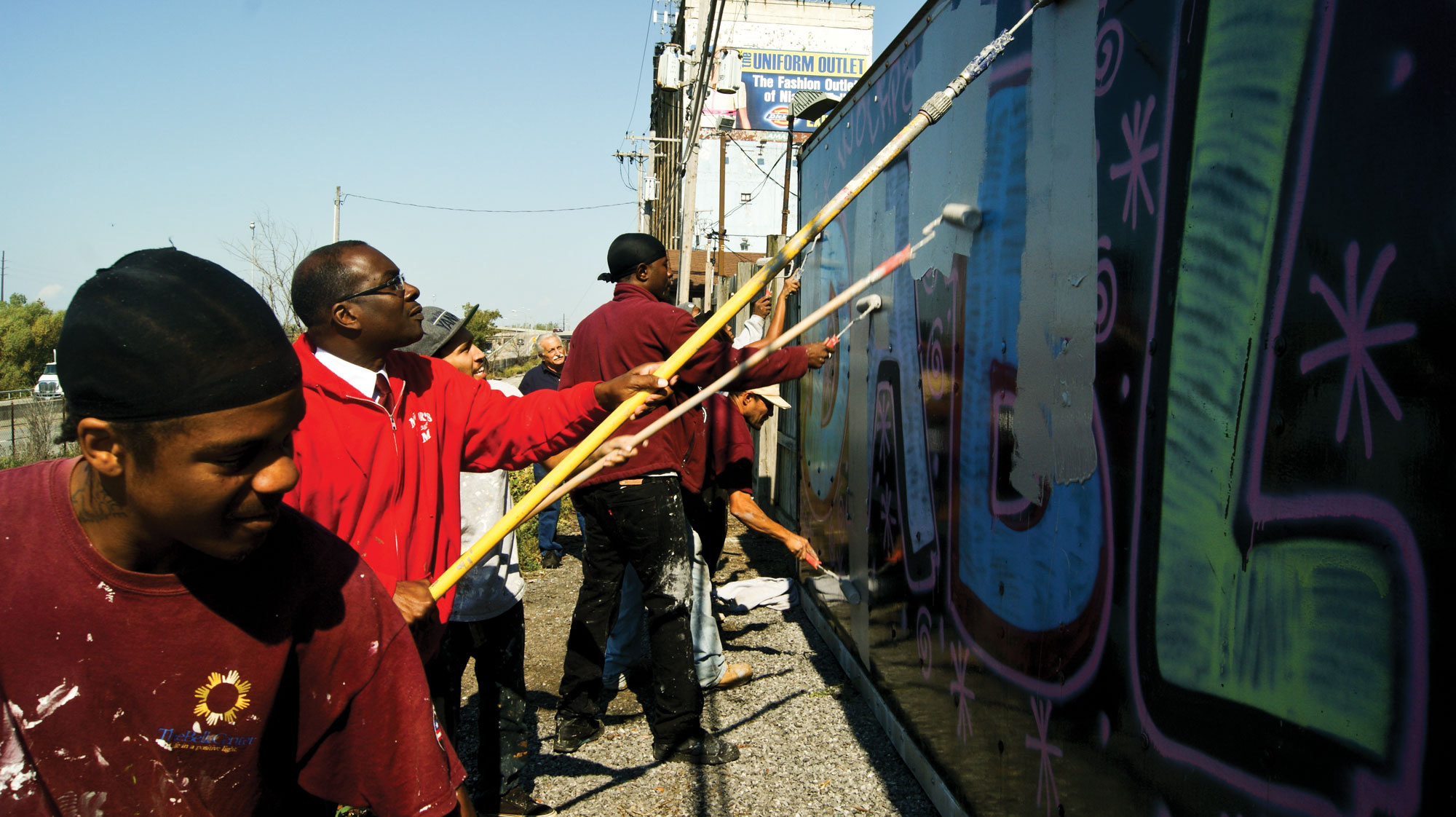 In April 2009, Mike Bloomberg became the first U.S. mayor to create the position of Chief Service Officer, an office dedicated solely to volunteerism. This became the model for Cities of Service.

Cities of Service is now an international network of more than 230 cities across the United States and the United Kingdom. It is one of the most recognized and sought-after organizations that helps mayors engage residents in creating programs based on local needs, mobilizes citizens to help collect data to inform better policies, and creates a network of volunteers that can be called upon in the event of disasters.

For example, in San José, California, staff supported by Cities of Service engaged community organizations to survey neighborhoods with non-traditional housing, such as motorhomes and converted garages, which often go uncounted in census records. During a one-week pilot, volunteers used a custom text-messaging tool and identified 630 such homes. San José will expand its housing survey ahead of the 2020 census. Cities of Service also has created a toolkit to help other cities do similar work. 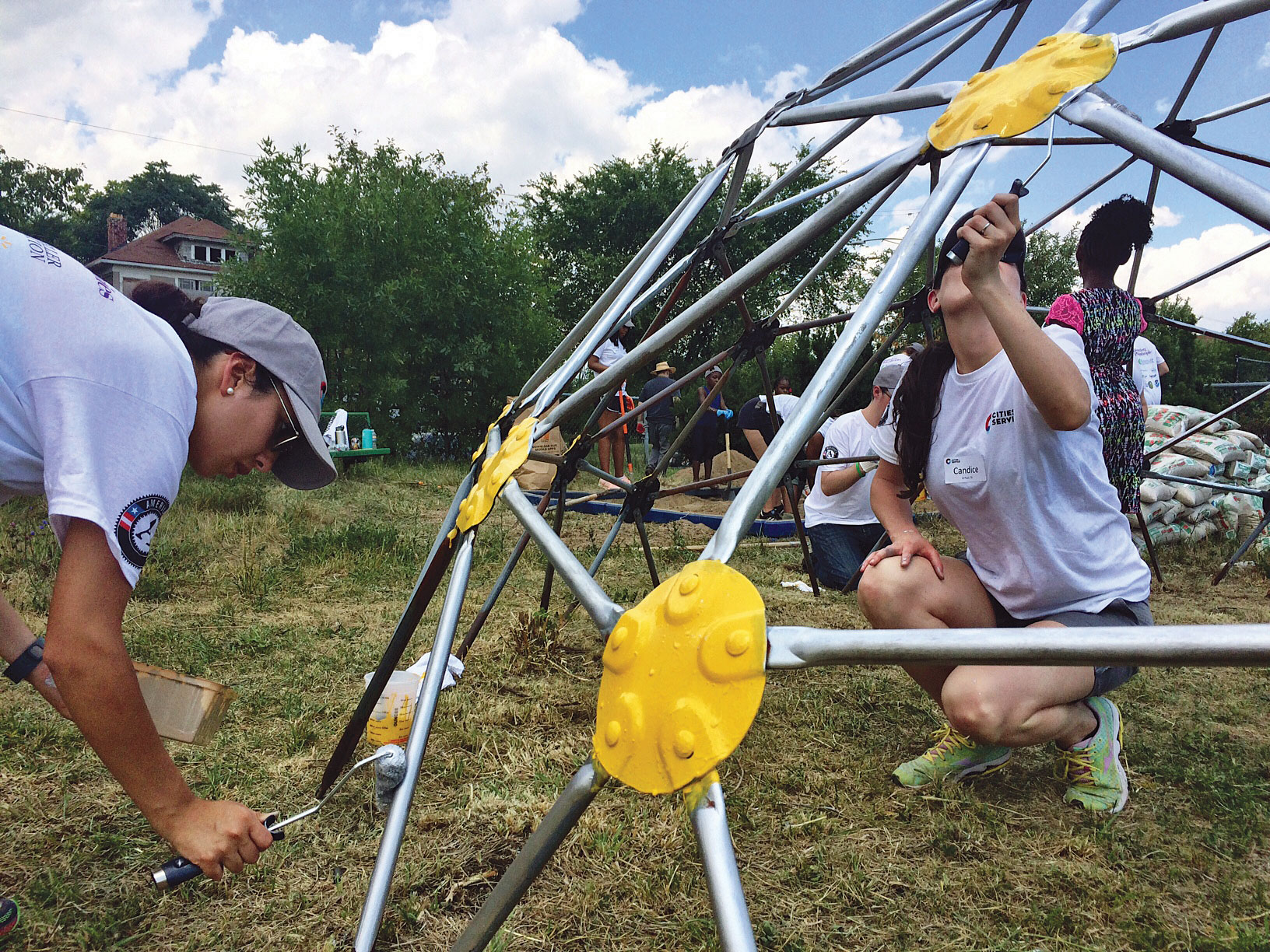