Share
Twitter LinkedIn Facebook Email
The Public Health program combats noncommunicable diseases and injuries by spreading solutions that are proven to save lives. By following the data and partnering with both national and local governments and organizations around the world, Bloomberg Philanthropies works to reduce preventable deaths from tobacco use, obesity, road traffic crashes, drowning, and other causes.

“Government can only be successful when it has support from civil society. The work that Bloomberg Philanthropies has done has literally saved tens of millions of lives.”
Dr. Tom Frieden
President and Chief Executive Officer, Resolve to Save Lives 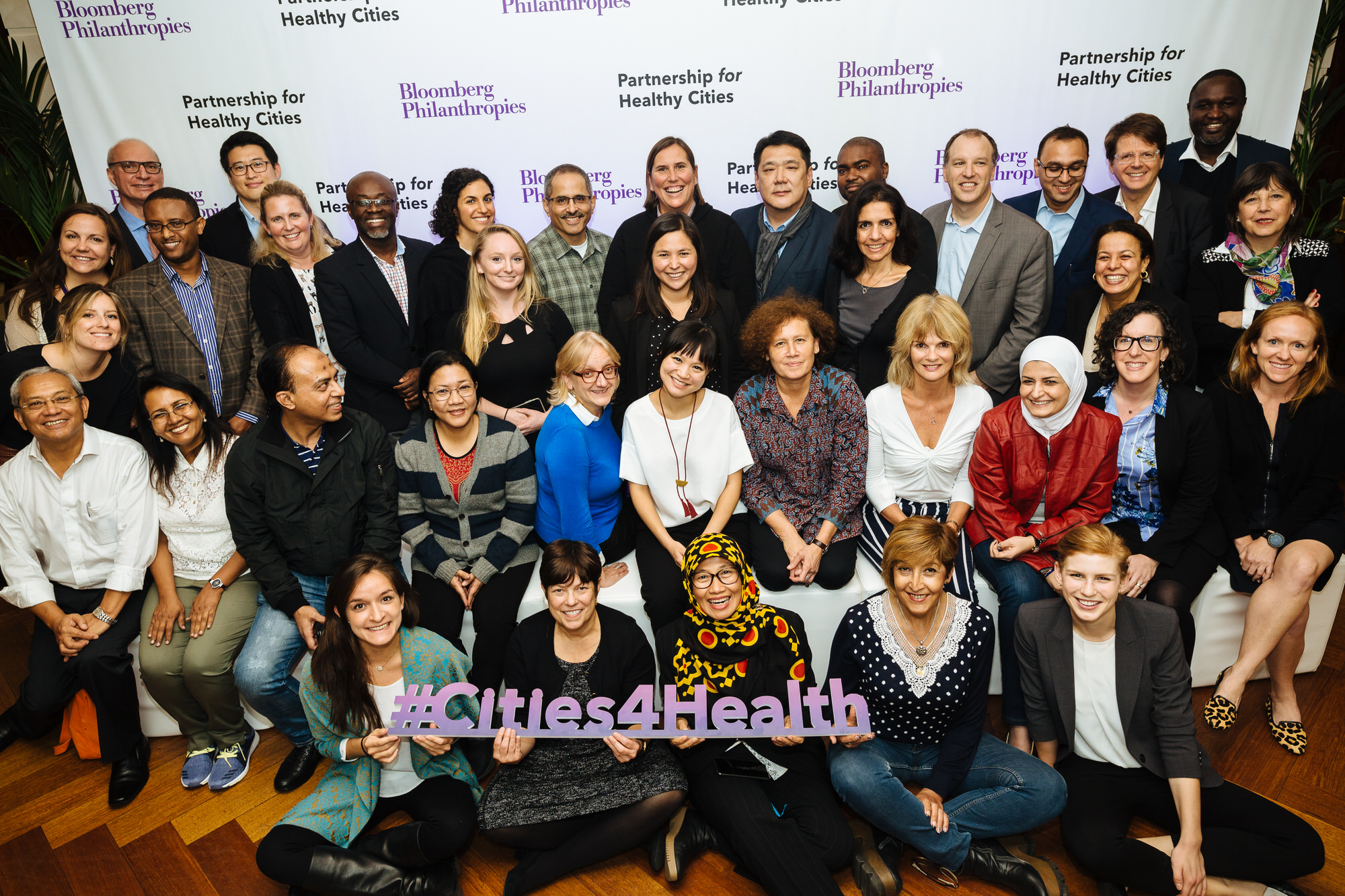 Officials from around the world came together to share best practices on how to reduce noncommunicable diseases and injuries and save lives as part of the Partnership for Healthy Cities. 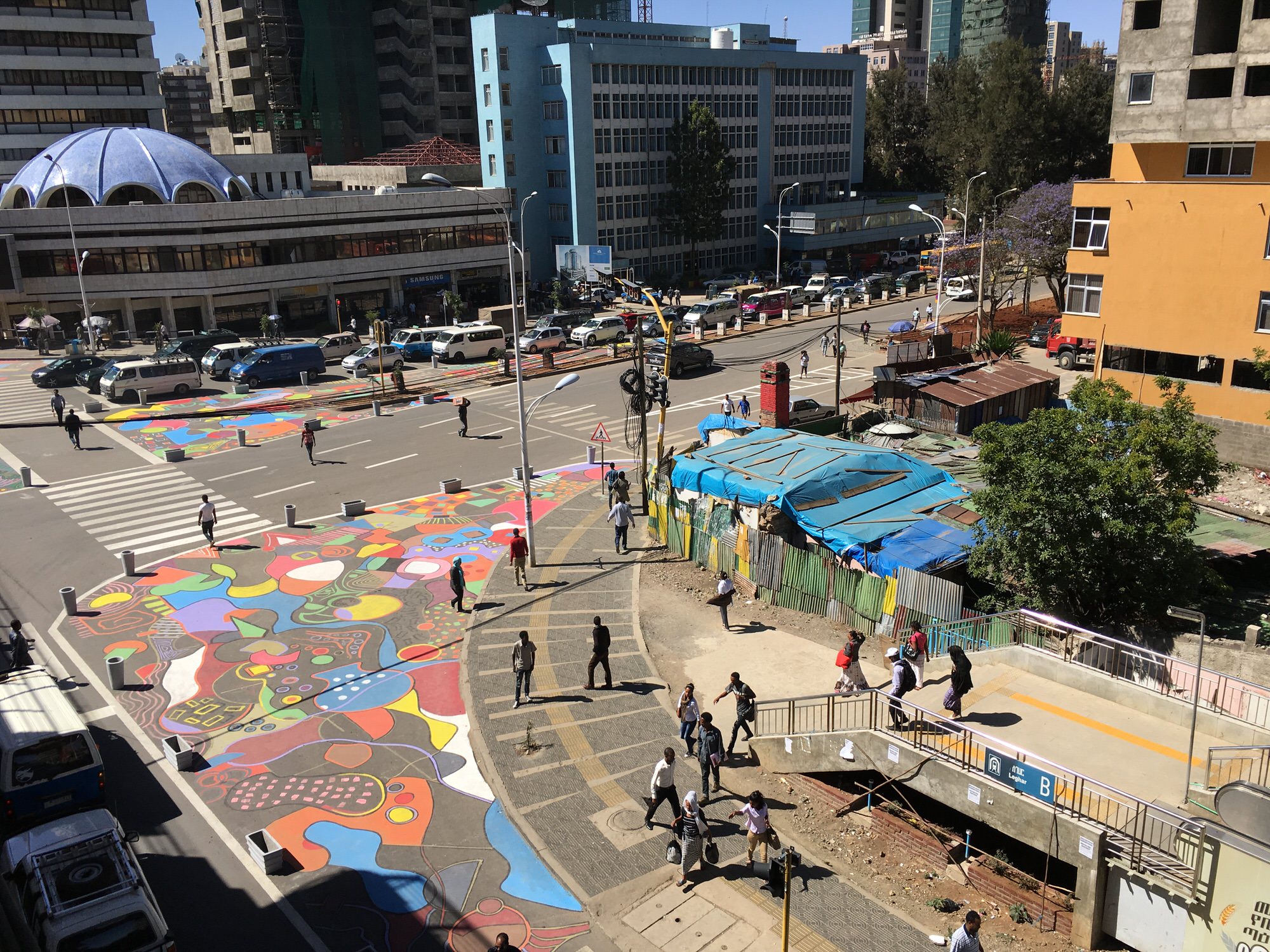 Temporary intersection transformations like this one in Addis Ababa are used to test changes to intersections before investing in permanent solutions. Credit: NACTO Global Designing Cities Initiative

Each year, road traffic crashes kill approximately 1.3 million people and injure up to 50 million more around the world. To fight these preventable deaths and injuries, Bloomberg Philanthropies has dedicated more than $250 million to improving road safety in low- and middle-income countries across Africa, Asia, and Latin America in an effort to protect everyone on the road, including pedestrians, bicyclists, motorcyclists, and vehicle occupants.

The initiative focuses on five main strategies: increasing the use of seat-belts and helmets; reducing both speeding and drinking and driving; promoting infrastructure improvements and sustainable urban transit; strengthening road safety laws; and advocating for improved vehicle safety standards.

Since this initiative began in 2007, Bloomberg Philanthropies and its partners have helped to save an estimated 125,000 lives through strengthened legislation, increased enforcement, and improvement of high-risk roads.

But still more needs to be done. To address rapid urbanization, Bloomberg Philanthropies is working in ten cities across the world to improve road safety by supporting awareness campaigns and increased enforcement of laws regarding helmet and seat-belt use as well as speeding and drinking and driving. Additionally, work continues to improve infrastructure so that roads are safe for everyone.

In addition to making streets safer, a Bloomberg Philanthropies-supported World Bank study published in early 2018 highlighted that reducing traffic deaths and injuries can have major economic returns. Data show that by reducing these deaths and injuries by half, certain countries could expect to increase their GDP per capita by up to 22 percent over two decades.

In Addis Ababa, Ethiopia, the LeGare intersection was temporarily transformed by a team of 100 people from five government agencies using nearly 200 gallons of paint and 120 planters to reclaim more than 21,000 square feet of underutilized space.

This relatively inexpensive change reduced the distance that pedestrians need to walk to cross the intersection and lowered the speed of the surrounding traffic. During this temporary installation, there were no traffic fatalities. As a result of this early success, the government of Addis Ababa has committed to transforming an additional 30 intersections over the next three years.

Partnership for Healthy Cities and Resolve to Save Lives 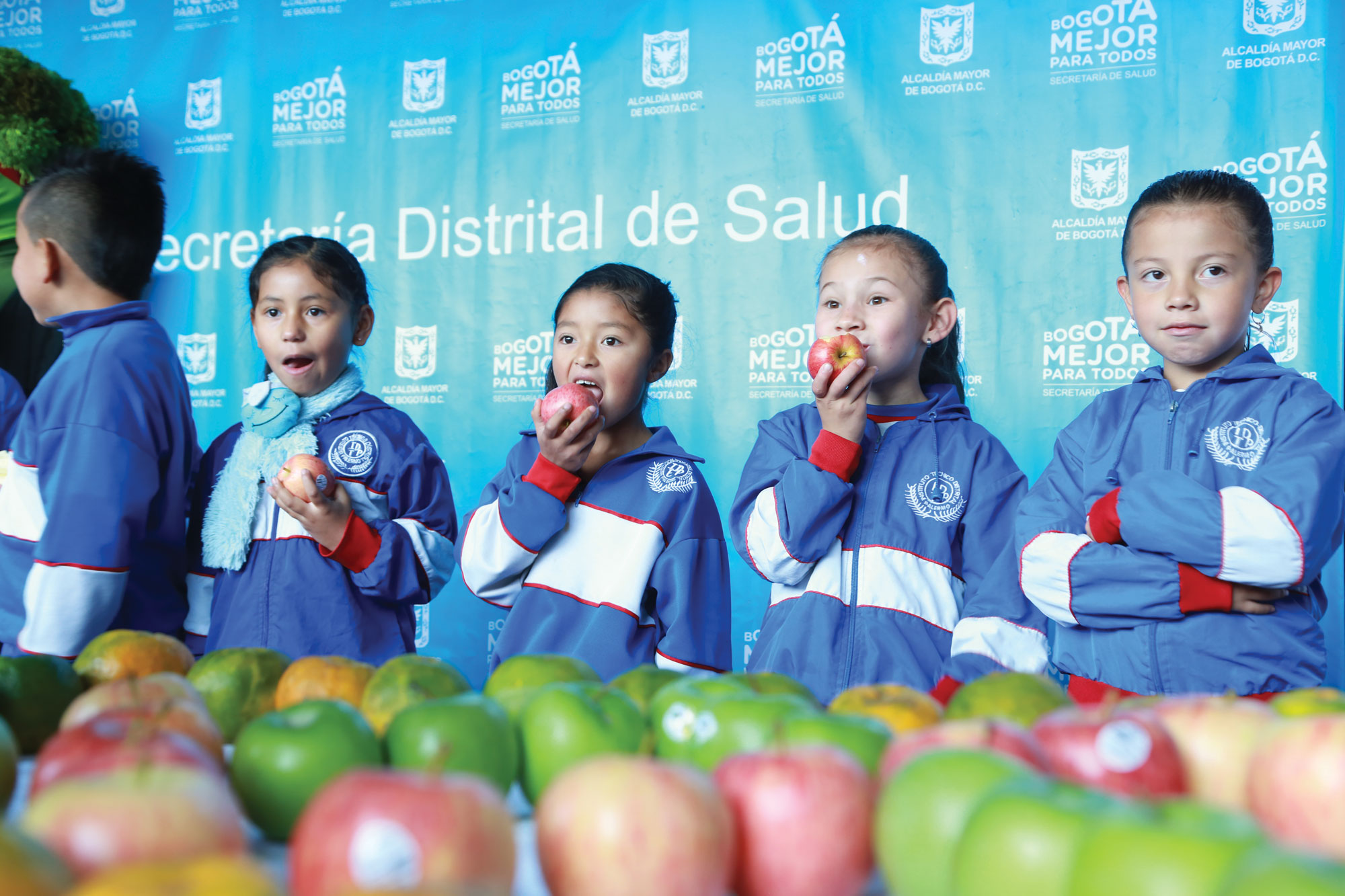 Students in Bogotá, Colombia, are benefiting from the city’s participation in the Partnership for Healthy Cities as it implements policies to encourage healthy eating.

Each year, 44 million people die from preventable causes such as cardiovascular disease, cancer, diabetes, chronic respiratory diseases, and other noncommunicable diseases (NCDs) as well as from injuries. A major focus of Bloomberg Philanthropies’ public health work is preventing these unnecessary deaths.

In 2017, as part of his role as the World Health Organization Global Ambassador for Noncommunicable Diseases, Mike Bloomberg launched the Partnership for Healthy Cities.

In just a year, this partnership has brought together more than 50 cities, representing over 216 million people, that have agreed to implement at least one proven policy to fight NCDs and injuries, increase awareness, and share best practices.

In 2017, Bloomberg Philanthropies also partnered with the Chan Zuckerberg Initiative and the Bill & Melinda Gates Foundation to co-fund an effort to prevent deaths specifically from cardiovascular disease. This new initiative, called Resolve to Save Lives, is led by former director of the Centers for Disease Control and Prevention and former New York City Health Commissioner Dr. Tom Frieden. It seeks to combat cardiovascular disease through the treatment of high blood pressure and the reduction of sodium and trans-fat consumption. 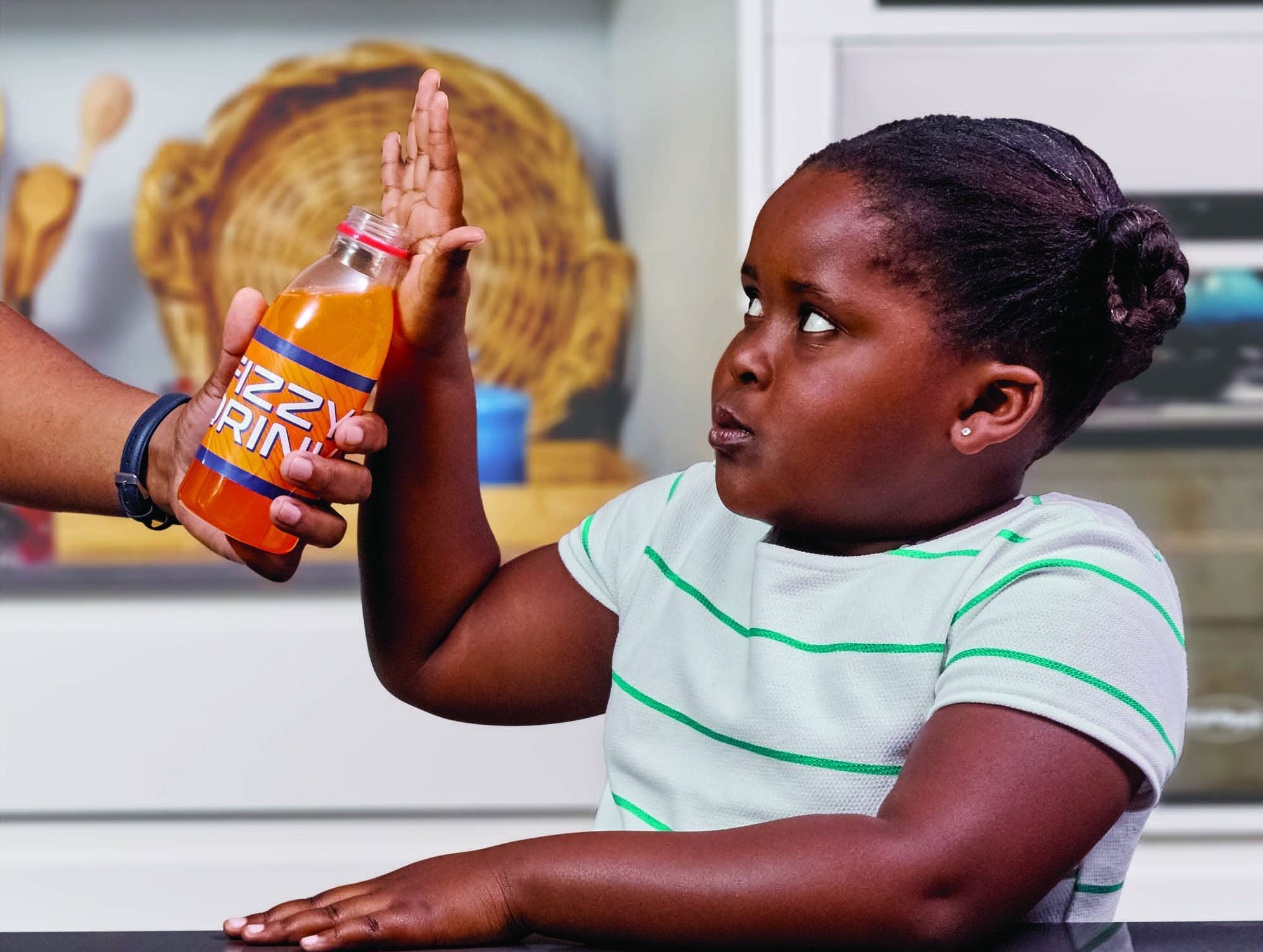 Partners in South Africa led a robust campaign to educate the public on the risks of sugary beverages and encourage support for a tax to limit their consumption. Credit: Healthy Living Alliance (HEALA)

Bloomberg Philanthropies is working with civil society organizations, research institutes, and governments in the United States and around the world to curb rising rates of obesity through policies that make healthier food more accessible. In 2017, building on the success of this effort in Mexico where lawmakers passed a tax on sugary beverages, partners in South Africa succeeded in having the parliament pass a similar national sugary beverage tax.

Thanks to media campaigns, coalition building, and strong advocacy with policy makers, the tax passed parliament and was signed into law by the president. It went into effect in April 2018 and is expected to cut sales of sugary beverages, much as it has done in Mexico.

In addition to work in Mexico and South Africa, in 2017, Mike Bloomberg invested in advocacy and research in Brazil, Colombia, and the Caribbean as well as in cities across the United States. 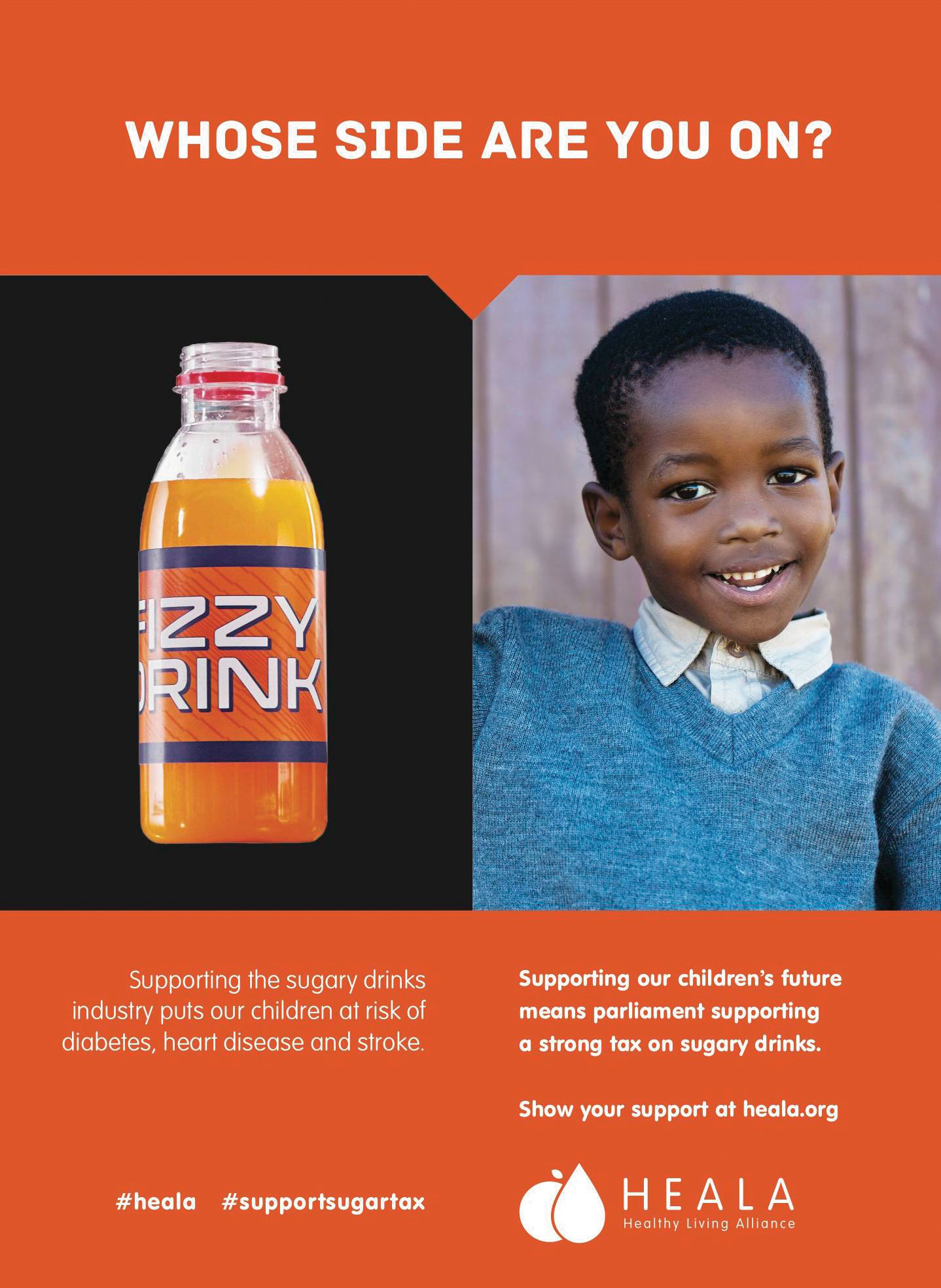 An advertisement from the campaign to educate the public on the risks of sugary beverages and encourage support for a tax to limit their consumption in South Africa. Credit: Healthy Living Alliance (HEALA)

Bloomberg Initiative to Reduce Tobacco Use 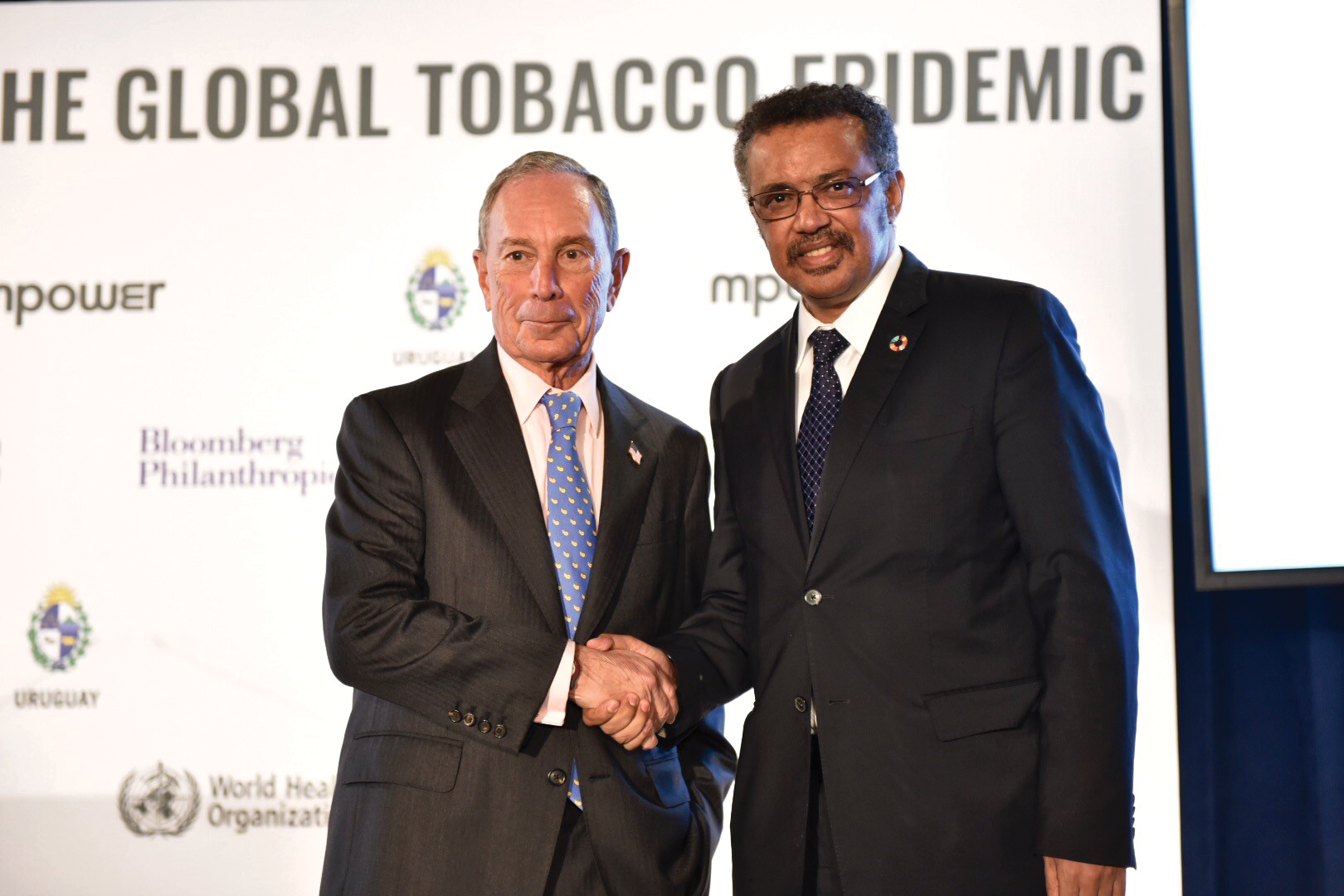 Mike Bloomberg in his role as WHO Global Ambassador for Noncommunicable Diseases and WHO Director-General Dr. Tedros Adhanom Ghebreyesus at the launch of the WHO Report on the Global Tobacco Epidemic, 2017.

One in ten deaths around the world is caused by tobacco use and, if left unchecked, tobacco is expected to claim one billion lives this century. Governments, however, have the power to prevent this unnecessary loss of life, which is why Bloomberg Philanthropies and its partners are working with national and local governments to support a package of policies, called MPOWER, that are proven to save lives. This initiative spans more than 110 countries and focuses on the world’s largest smoking populations in China, India, Indonesia, and Bangladesh.

Over the past decade, Bloomberg Philanthropies has invested $1 billion in tobacco control and has helped to change the trend of cigarette sales. Data show a 3 percent fall from 2015 to 2016 in global sales of cigarettes, driven by a 5.6 percent decline in China.

In recent years, Bloomberg Philanthropies has provided support to cities across China as they worked to pass comprehensive smoke-free laws. In 2017, Shanghai implemented an exemplary law that bans smoking inside public buildings, offices, on public transportation, in stadiums, and in outdoor public areas used by minors such as schools. Initial reports have shown 85 percent of venues are compliant with the law.

In June 2017, Mike Bloomberg, alongside the recently elected WHO Director-General Dr. Tedros Adhanom Ghebreyesus, released the WHO Report on the Global Tobacco Epidemic, 2017. This biennial report highlights the global progress of MPOWER policies proven to reduce tobacco use and save lives. It noted that about 4.7 billion people — or 63 percent of the world’s population — are now covered by at least one comprehensive tobacco control policy. This is a fourfold increase from the first report in 2007, showing that progress is not only possible, but is being made around the world.

Following the Data to Save Lives 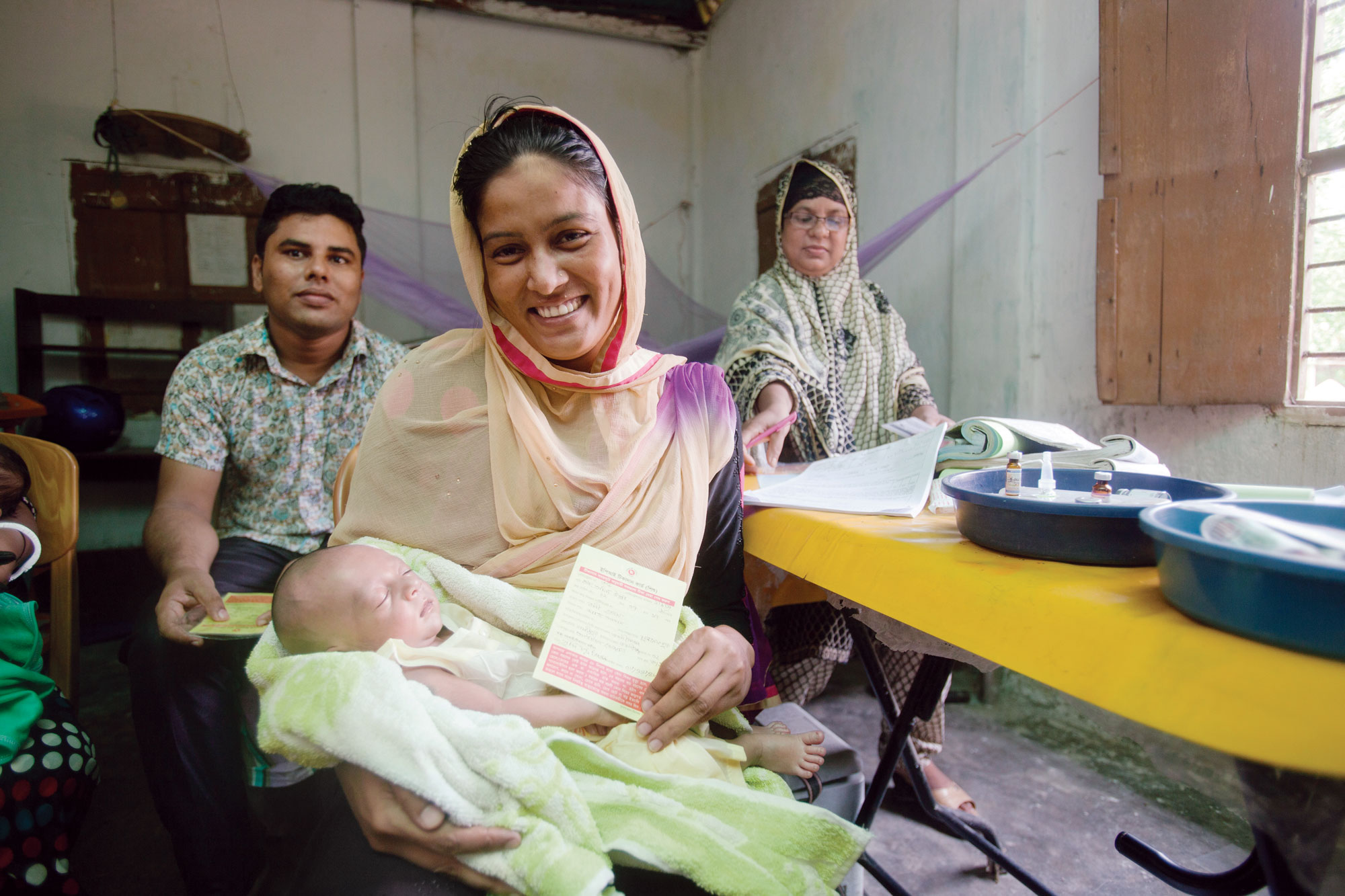 A new mother in Bangladesh shows her child’s vaccination card, which now also shows whether the child’s birth has been registered — a modification made through Data for Health. Credit: Vital Strategies

Today, half of all deaths in the world — nearly 30 million each year — go unrecorded, and too many health policy decisions are based on inadequate or incomplete information. Data for Health, an initiative co-funded with the Australian government, seeks to close that gap by helping low- and middle-income countries across Latin America, Asia, and Africa collect better public health data and improve the way they use this information to inform policy making and investments in public health.

Data for Health supports the creation of more complete birth and death records and makes sure these data and other critical health indicators are used by leaders to inform policy. To date, 20 countries — representing more than 1 billion people — have partnered with Bloomberg Philanthropies to receive technical assistance to improve their public health data.

Protecting the Lives of Children 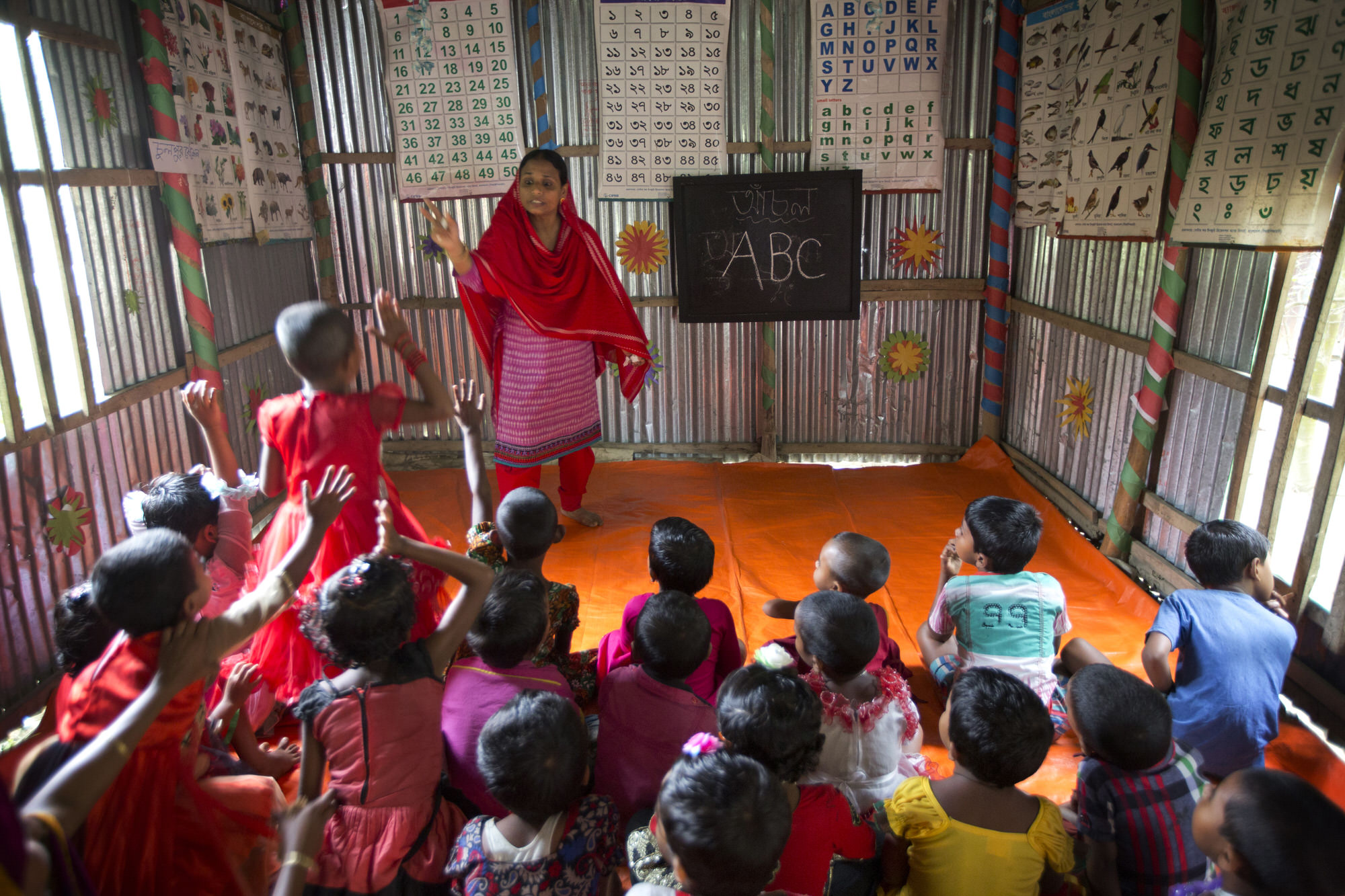 The Drowning Prevention program focuses on finding local solutions in rural Bangladesh, where at least 12,000 children under the age of five drown each year.

New research led by the Johns Hopkins University Bloomberg School of Public Health has pointed to the use of community daycare centers as an effective drowning prevention strategy, reducing drownings by 74 percent by ensuring that children are supervised and away from water.

As part of this effort, Bloomberg Philanthropies has supported the opening of more than 2,500 centers across Bangladesh, and work is under way to explore how to integrate these centers into the national government’s program to prevent drownings. Efforts have begun to pilot similar interventions in Vietnam.

Improving the Health of Women and Families 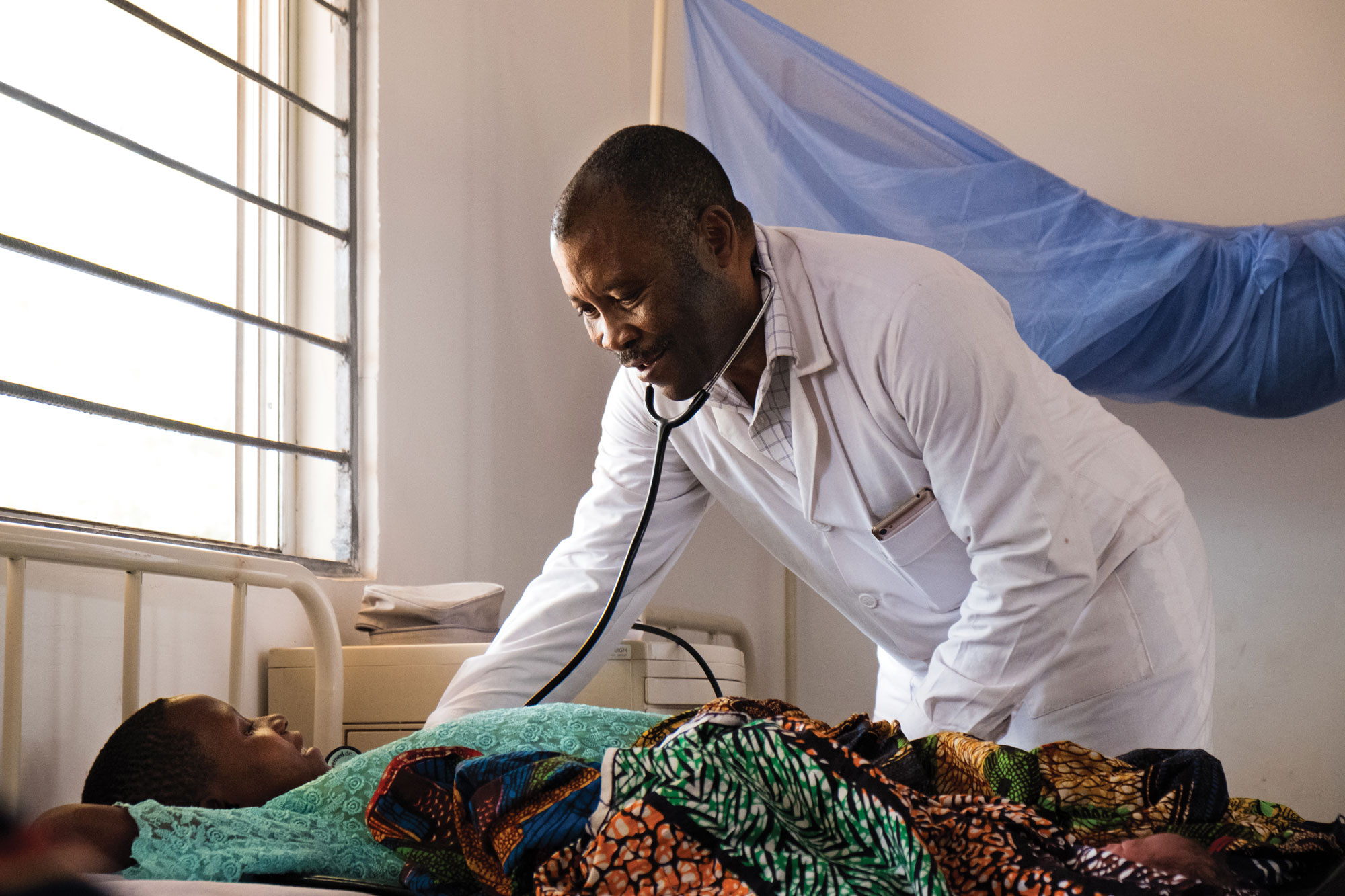 By building operating rooms and training more health care workers, the Maternal Health program in Tanzania has expanded the coverage of maternal health and brought life-saving emergency obstetric care to the women who need it most.

Bloomberg Philanthropies supports access to quality maternal and reproductive health services around the world. By focusing on countries where access to contraception and maternal health care is limited, this initiative works to improve health outcomes for mothers and their children.

In Tanzania, one woman dies every hour from complications of pregnancy or childbirth. There is, however, great progress being made. By training non-physicians in rural communities to provide obstetric care, upgrading clinics, and increasing women’s access to and awareness of maternal health resources, Bloomberg Philanthropies has supported the delivery of nearly 100,000 babies. This program is in the process of being transferred to the national government and will serve as a model that can be scaled across the entire country. 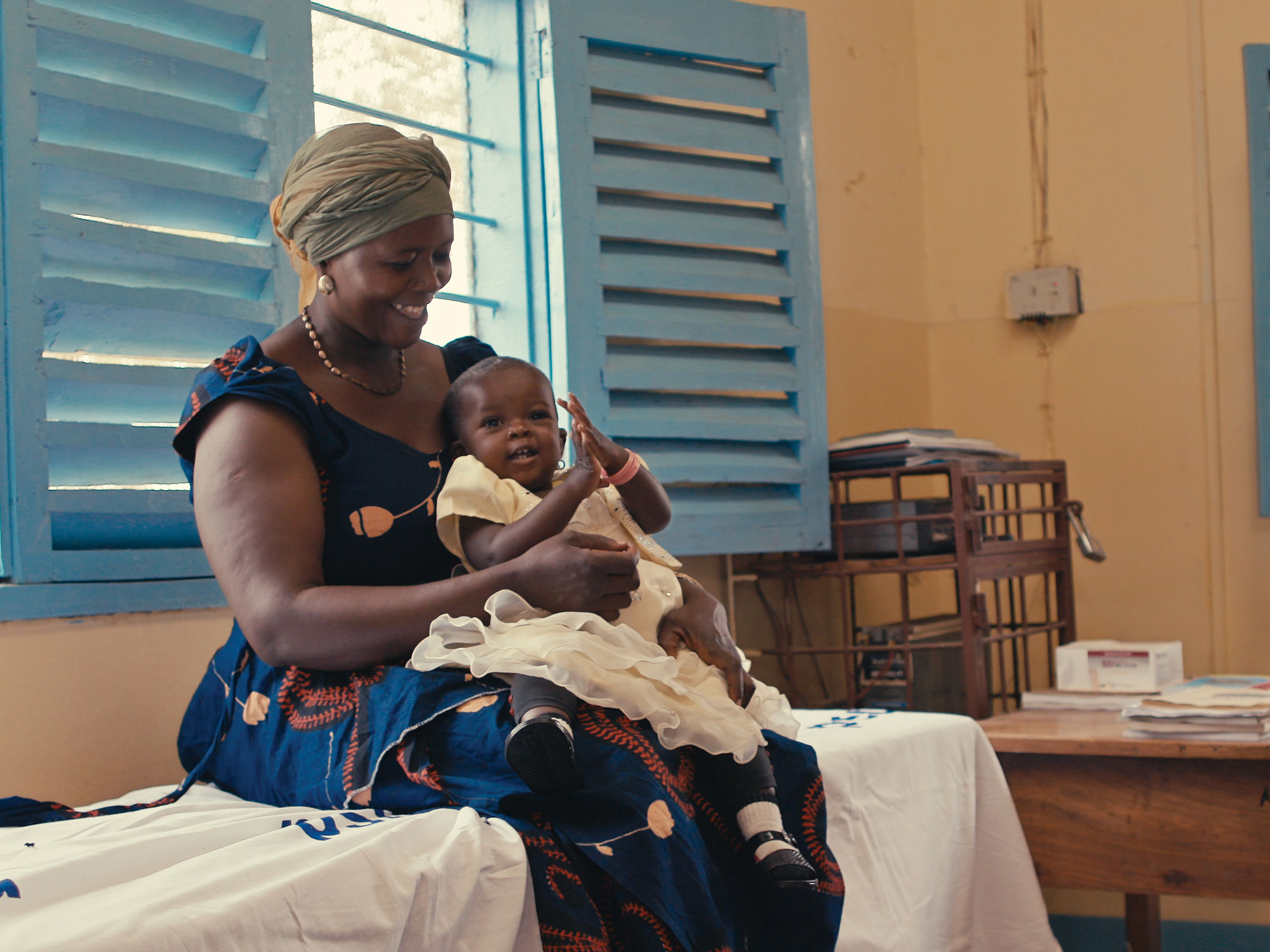 By building operating rooms and training more health care workers, the Maternal Health program in Tanzania has expanded the coverage of maternal health and brought life-saving emergency obstetric care to the women who need it most. 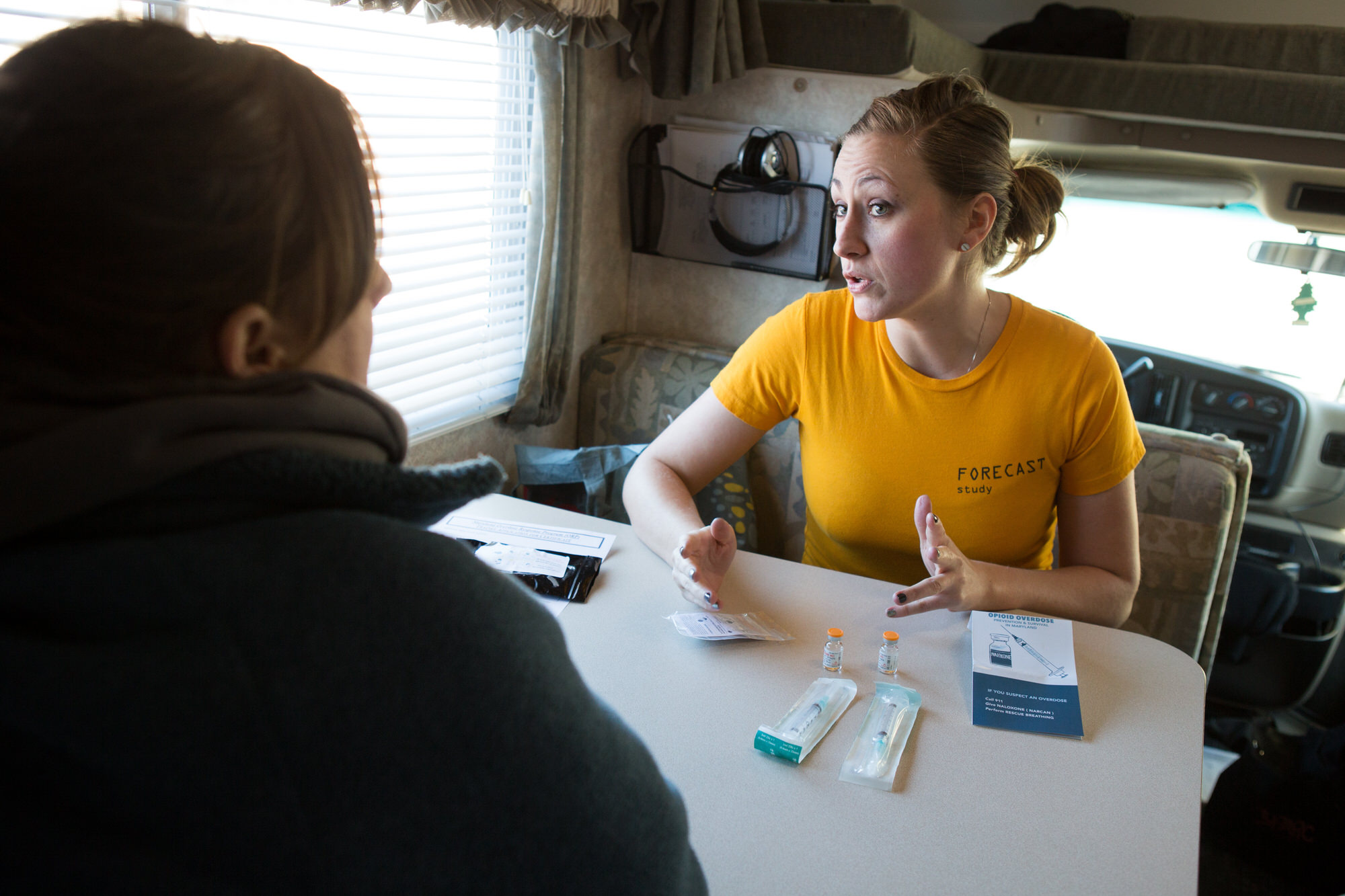 The Bloomberg American Health Initiative investigated three available technologies to provide people who use drugs with information that could save their lives. Credit: Johns Hopkins Bloomberg School of Public Health

For the first time since the early 1960s, the average life expectancy of Americans has declined for the second year in a row. The United States now ranks 31st in the world in life expectancy — behind most leading industrialized countries.

In response to this trend, Mike Bloomberg made a historic $300 million investment to establish the Bloomberg American Health Initiative at Johns Hopkins University.

In response to the national opioid epidemic, experts have consulted with governors and mayors to advise them on strategies to combat this public health crisis. Researchers have also conducted a multi-city study on detecting fentanyl — a synthetic, deadly, low-cost opioid — in street drugs. The study, one of the first on the subject, showed that low-cost test strips were both accurate and easy to use in testing for fentanyl.